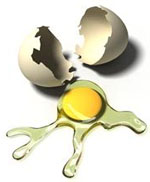 Knowing how to lose weight entails this neat little surprise – eat eggs for breakfast. Here is what recent studies show. The bonus is that eggs have no effect on cholesterol levels.

The Good News on How to Lose Weight

A series of studies have been published in the past few years about the dietary benefits of eggs. Unfortunately, way too many nutritionists and medical doctors are still offering the tired old advice to cut back on eggs. Here is what you should know instead.

One of the best studies is the following:

The objective of this study was to find out whether an egg breakfast would match up with a bagel breakfast regarding weight loss. I know for all you slow carb diet and low carb diet fans out there that this seems like searching for the obvious. The study design had a little twist, though, that makes their conclusions a bit murky.

Groups 1 and 3, which had no daily caloric restriction, showed no significant differences for BMI, weight loss, waist circumference, or body fat composition.

The conclusions of this study were: Breakfast eggs enhance weight loss when combined with a calorie-restricted diet but not when caloric intake is unrestricted.

Just imagine what the results could have been if the researchers had compared a slow carb diet with eggs for breakfast and without caloric restriction. This would have been a really nice chance to assign a fifth group to this diet. Ah, well, an opportunity missed.

We can only speculate on the possibilities at this time. However, the slow carb diet is already well-known among its practitioners to be a highly effective approach to weight management. I’d bet that speculation would probably be accurate that the fifth (nonexistent) group would have shown even better results.

Worried About Cholesterol in Eggs?

It is high time that we lay to rest the myth that cholesterol in eggs is bad for anyone. For that matter, we should extend such silliness to include all dietary cholesterol. If you or your medical people are still clinging to the misguided notion that consuming cholesterol is a health risk, take a look at these two publications.

Skipping to the conclusions of interest: An increased intake of dietary cholesterol from two eggs a day does not increase total plasma or LDL cholesterol when accompanied by moderate weight loss (7.5 to 9.5 pounds in 12 weeks). These findings suggest that cholesterol-rich foods should not be excluded from dietary advice to lose weight on account of an unfavorable influence on plasma LDL cholesterol.

(Once again, it is too bad they had to confuse the issue with calorie restrictions instead of food types such as those recommended on a slow carb diet.)

With pointers on how to lose weight – eggsactly,