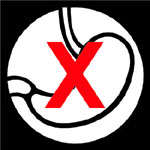 Gastric bypass surgery is insane. Besides the expense, the danger, and the failure rate of this highly invasive strategy for weight loss, it will also make you age faster. It just does not make sense physiologically. Here is why.

The entry at Wikipedia on Gastric Bypass Surgery provides lots of details. Note that this entry comes from the medical industry. You can expect that complications and problems are underestimated and success rates are overestimated.

Just some food for thought here. These are notes at the bottom of that page, with explanations on each heading listed here:

None of these problems are necessary, because gastric bypass surgery is not necessary!

Digestion is a hormone-driven process, as is human physiology in general.

Gastric bypass surgery reduces the amount of functional stomach. The stomach makes a hormone called ghrelin, which is the key hormone that stimulates hunger and leads to overeating.

Ghrelin levels are permanently reduced by gastric bypass surgery because there are far fewer stomach cells left that can make it. This means no normal ghrelin response to food.

This may seem like a good thing, because hunger should be lessened with lower levels of ghrelin. However, ghrelin is also the key signal in the body for enabling the proper release of growth hormone. This is a relatively recent and major discovery regarding growth hormone.

Reducing growth hormone release simulates aging. By accelerating this process, the overall effect is to get older faster. Many clinical symptoms appear as we age. Several are starting to show up as a consequence of gastric bypass surgery.

One that has become most obvious is the development of metabolic bone disease – accelerated bone loss. Here is an abstract of a research article that appeared on this topic 7 years ago. Isn’t it interesting that the mainstream medical information on gastric bypass surgery at Wikipedia makes no mention of this problem? See below. 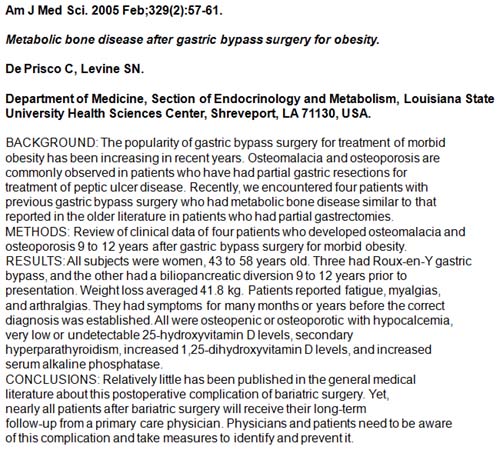 That pretty much sums up some of the key points about this weight loss strategy. It doesn’t sound too appealing, does it?