Advice to eat less and exercise more has become dogma of mythical proportions for weight loss. Unfortunately, it does not work. It never has worked. Now a decade long federally funded study confirms it. Here are the results and what you should do instead for truly effective weight loss.

The study in question was published recently in the New England Journal of Medicine, here:

This was a phenomenal undertaking that lasted almost 10 years before it was terminated early. It was planned to go for more than 13 years, until the plug was pulled due to disappointing results. Results were supposed to show the benefits of weight loss for people with type 2 diabetes.

Fortunately, effective strategies for losing weight are already known. Later in this post I explain what you can actually do for weight loss, since this latest study once again confirms the futility of eating less and exercising more to lose weight loss.

The study design seemed logical at the outset, with plenty of subjects (more than 5,000), supposedly effective strategies for getting them to lose weight, and a long enough time-frame (13.5 years) to show significant results.

Here is how the study group measured up at the beginning, averaging the following:

All subjects were classified as overweight or obese. The research was conducted at 16 study centers for nearly 10 years, so they of course had to keep track a lot of other factors besides weight. These included age, gender, race, and various measures of health indicators (cholesterol and triglyceride levels, blood pressure, insulin use, etc.).

The whole purpose of the study was to show the health benefits of weight loss in folks with type 2 diabetes. As I mentioned earlier, it was cut short because the ongoing results were so disappointing. I suspect that the meager weight loss results undermined the original expectations .

Here is what the study subjects were supposed to do to lose weight:

Study participants were given a calorie goal of 1200-1500 kcal/day for those who weighed less than 250 lbs and 1500 to 1800 kcal/day for those over 250 lbs. They were encouraged to consume 30 percent of total calories from fat and at least 15 percent of calories from protein. Meal replacement products were provided at no cost to help participants adhere to their dietary goals. During weeks 3 to 19 of the program, individuals were encouraged to replace two meals each day with a liquid shake and one snack with a bar. The other meal (typically dinner) consisted of conventional foods; fruits and vegetables were added to reach the calorie goal. From week 20 on, meal replacements were typically used for one meal per day with conventional foods consumed at the other times.

At least 175 minutes of moderate-intensity physical activity per week.

MY COMMENT: This study was doomed to failure at the outset. First, it is a high-carb diet, which undermines weight loss. Second, most exercise programs fail to do anything for sustained weight loss.

Weight loss is still a key indicator according to mainstream thinking (although it is not nearly important as fat loss, which was not addressed in this study). Here is what this indicator showed after nearly 10 years of eating less and exercising more: 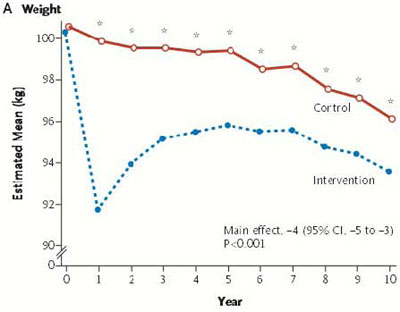 This probably looks familiar to you for the first year, because this is the period of time that the vast majority of weight loss programs show their results. You see rapid weight loss for about 12 months, followed by rebound weight gain. Specifically, the average loss was 8.6 percent for year 1, which translates to an average of about 19 pounds. No great shakes, although not too bad.

The difference between the study group and the control group amounted to an average of 5 pounds after 10 years. And this was called a statistically significant result. Gee, aren’t you impressed? 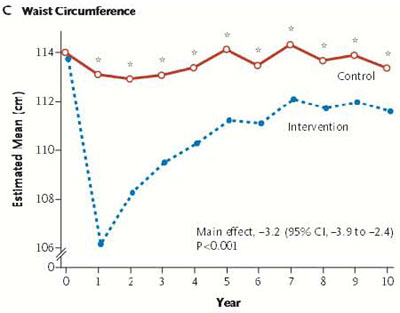 It is eye-popping to realize that this massive study, costing millions of dollars, amounted to nearly nothing as far as its original goals were outlined. The premise of losing weight by eating less and exercising more is simply wrong. Unfortunately, we have most likely not seen an end these kinds of wasteful studies. Once a bit of advice reaches the level of dogma, it is hard to reject it even in the face of negative evidence.

Reporting on this study may leave a major loose end for you. If the most common advice for losing weight doesn’t work, then what does? This is really a lot easier than you might think.

First off, the whole notion of using the number of calories in food for maintaining weight is ridiculous. It is as if calories go into your body and are somehow directed into storage, perhaps as fat. The reality is that calories are units of heat, and heat is metabolically useless except for maintaining body temperature.

I have explained a lot more about why calorie counting is never going to help you lose weight, or more appropriately lose fat, in a new book that I recently wrote about the biology of fat loss. I will tell you more about it at the end of this post. For now, here is a truism that you should know and understand before you can truly begin to stop and reverse the accumulation of excess fat in your body:

Once you realize that the cause and effect of overweight and overfat are just the opposite of what everyone tells you, then you can start doing the right things to rid yourself of excess fat.

If that sound like weight loss heresy, then here are a couple more truths that may come as a surprise:

A tremendous amount of good science backs up every one of those statements. Some of the best supporting research is more than a century old. Many other factors are now known to cause obesity, all of which can be overcome. Everything from hormone imbalances to nutrient deficiencies to age-related changes in fat metabolism can and do lead to gaining fat. They are all easily reversed. Recent research even shows that you can change how your genes work. Yes, gene expression is no longer set in stone.

It is phenomenal what you can do for slimming down, getting healthier than you have been in years, and staying that way for the rest of your life. Indeed, knowing what I have uncovered about the biology of fat loss shows you how to look and feel the way you are supposed to.

It would take way too much space to even outline the right things to do here. That is why I put all the best strategies into an ebook. You can see what it contains by examining the complete table of contents here: FatLossBiology.com.

Go ahead and at least take a look at the table of contents to see what this book provides. As a retired ‘old’ professor, formerly tired and fat, I can tell you that life is a lot better after dropping 35 pounds and about 8 percent body fat. Shoot, I have even had to get newer pants and belts for my smaller waist size!

The only disclaimer that I feel I must tell you about is what a friend told me recently after he dropped 25 pounds based on the advice in my book. He wanted me to be responsible for the cost of replacing all his old ‘fat’ clothes. Very funny. Right?

All the best in weight loss,