Man problems are rampant, if the prevalence of commercials about taking baths outdoors with your honey is any indication. One prominent naturopathic doctor calls this increase in ED, man boobs, etc., as the wimpfication of American males. Belly fat might be the main culprit. 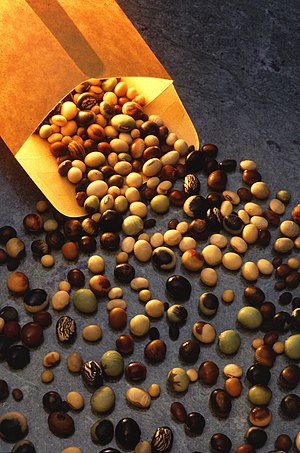 The idea for posting on this topic occurred to me while I was out jogging in the heat this afternoon. Delirium sometimes spurs creativity that way.

The naturopath that I refer to is Dr. William Wong. He blames the overdevelopment of the feminine side of men, so to speak, on soy. Soy products are everywhere, so this is an easy target. He objects to the widespread exposure to a particular phytoestrogen, called genistein, that is made by soybean plants. Never mind that genistein is the active ingredient of a patented natural cancer treatment, which is a rare thing indeed. And forget that phytoestrogens such as genistein are, in fact, not steroids; nor are such molecules in any way chemically related to steroids.

The fear of phytoestrogens from soy is misplaced, anyway. The most potent phyoestrogen of all is produced by hops plants, which means that it is common ingredient in beer. Can you imagine a campaign to eradicate beer because it contains a powerful phytoestrogen that might downgrade your manliness? Nah. I didn’t think so. Soy is a much easier target.

The topic of this post is that belly fat is a more likely culprit, because abnormal fat is well known to be an estrogen factory. (Quick note to menopausal women: If you are carrying a substantial amount of unwanted fat around your belly, thighs, upper arms, or backside, then be aware that your estrogen production has most assuredly NOT come to a halt.)

Overproduction of estrogen (more specifically, estradiol) by belly fat puts a strain on your balance of steroid hormones. Although your body synthesizes more than 150 steroid hormones, a drop in levels of the one called progesterone as you age seems to be the most critical. Progesterone acts to oppose the effects of estrogen, thereby negating the onset of estrogen dominance. It also provides material that can be made into testosterone, so less progesterone leads to testosterone deficiency.

And heaven help you if you drink bottled water or eat canned foods. The BPA from plastic bottles and plastic liners in most food cans acts like a foreign estrogen (techie term is xenoestrogen), which makes everything in your body that is already going downhill just degenerate faster.

I’m not going to pop off with some sort of general, arm-waving recommendation to get more steroids into your system. You can, of course, get prescription testosterone shots or patches. That may help. You can more easily do what I do, which is to use a progesterone cream every day, in a formula for manly men. (Women have to use a different formula.)

Pointing out problems is easy, and giving simple-minded recommendations may or may not be effective. What I will say, though, is that all of the hormone imbalance that is associated with belly fat, regardless of whether it is the cause or the effect, can be put back on track when you start restoring your native levels of human growth hormone (HGH).

This is why I included a discussion about how to increase HGH levels as one of the steps in my report, “5 Steps to a Slimmer and Healthier You,” which is free through this blog. And it is why I have found out all the easiest natural ways to boost HGH levels, from dietary changes to supplements, exercise, and even the role of sleep.

The bottom line to finish this post, then, is this: Belly fat is a bigger problem than you might think (sorry for the pun there). It diminishes maleness, among other things. However, as long as you do what it takes to get your HGH levels to where they should be, then belly fat becomes less of a problem, as do all the secondary issues that are associated with it.

That is as far as my heat-stroke delirium can take me for the moment.